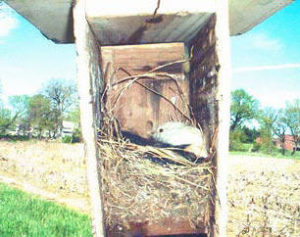 Bluebirds Across Nebraska has been very fortunate since people starting turning in report forms ten years ago to not have just one, but three sightings of albino bluebirds.

The first sighting was reported in 1996 by June Papst & Julie Milota of Papillion in Sarpy County. The box contained five nestlings, two of which were albinos. The albino nestlings were banded and photographed. At the time, no one realized that this was possibly the first pair of albino bluebird siblings ever recorded in North America.

Julie Milota once again reported albino bluebirds on her trail near Papillion in 2002. This time there was a partial albino adult female mating with a normal male bluebird. They successfully fledged two broods of five – none of which were albino.

The third occurrence of albino bluebirds occurred in 2003 near the town of Nehawka in Cass County. The boxes were monitored by Alberta and Linda Nichols. Their box contained four nestlings, of which one was an Nebraska’s Albino Bluebirds albino. All nestlings fledged and the albino was spotted two days later.

BAN receives report forms each year from across the entire state and what makes these sightings even more unusual is that the boxes were all within 25 miles of one another. Since bluebirds normally return to the same area every year, one might conclude that genetics had a strong part to play in this.